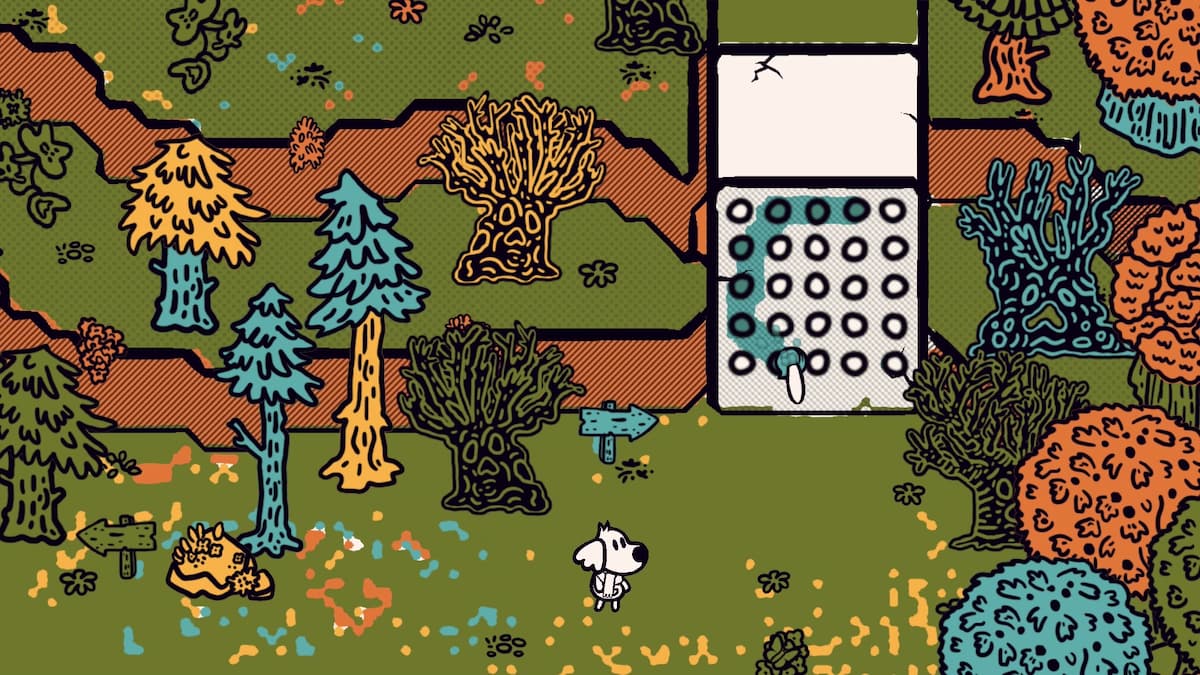 Your first real challenge as the ruler of the magic brush will be to enter and explore the Temple of the Wielder as you investigate the mysterious corruption and loss of color that has hit the earth. As you descend into the temple, you will need to color the environment to find your way and open the door. But first you really have to get inside.

The entrance to the temple is north of Potluck and there is a door with a grid of dots that lock you out of it. First you have to get to Appie Foothills, which is currently isolated due to some interfering rocks, which you can easily get rid of with exploding colors. In Appie Foothills you will find a large lion named Cardamom, who was once the ruler himself – he is a much warmer character than the other former rulers you have met so far. Follow him to his house and he will show you a pattern that you will paint on the door and open it. Take a screenshot or photo in the game if you can’t remember it.

Once you paint this mysterious symbol on the dots, you can walk around – just to come across another similar door. It is easy to think about this next part, because in front of the door there is a part similar to a 4 × 4 grid on the door. It’s an obvious hint of a door pattern, but the easiest way to do that is to simply paint it on plant buds so you can grow it fully. Fill in the dots on the door grid that correspond to these adult plants.

The temple itself is washed by any color like the rest of the world, with sinister text and messages describing the history and importance of the ruler. Our tip is to press and hold the paint function to fill the entire floor with paint, because hidden messages will appear when painting. It can be multiple text messages or triangles indicating hidden passages. Move and use exploding colored balls to create these passages on cracked walls or in front of these hidden triangles.

Examine each room and on the far right of the first floor is a pattern reminiscent of a tree you enter on the door of the middle room.

The next floor down will have a 4 × 4 grid that can take various entrances to open certain areas. Go all the way to the left and paint the area in front of two large stone doors to find a pattern that will allow you to go through two of the four stones that are blocking you, including the passage to the far right. Painting this room will reveal a pattern for unlocking the other two stone doors, but keep in mind that changing the pattern on the grid will change the door that is open. Once you walk around the stones, you will want to switch between the two patterns; from the main room, walk past the upper left stone, switch back to the first pattern, and then go to the left room and walk through the right corridor, which is now open.

The last floor will offer you a 6 × 6 grid – notice that it is divided into thirds. Scroll down and you will see three stone doors and a 5 × 5 grid; The screen below will have another stone door to the south. Also notice the triangles that point to the stones. From there, go far left to the shrine to the first ruler; paint the floor to see a pattern resembling a triangle pointing up. Return to the center room and draw that triangle on a 5 × 5 grid to reveal the Litter in the upper room. It may not be clear at first, but you have to draw this triangle in different directions before you can go through the other three doors. Each of these rooms will give you one of the three parts of a 6 × 6 puzzle.

In the room on the right, use the plants to drain to the other side; the first pattern, specifically for the upper right third of the 6 × 6 door, will be on the wall. The room to the far left might be a little hard to make out; paint the whole room and you will see hidden dots on the floor. It is basically a 6 × 6 grid and the plus-shaped pattern that forms the bouncing cases is actually a pattern for the upper left third of the 6 × 6 door. Finally, go to the lower room and paint the floor and walls on the lower pattern for the 6 × door 6. Put all three shapes in the right place and then get ready to fight the boss.