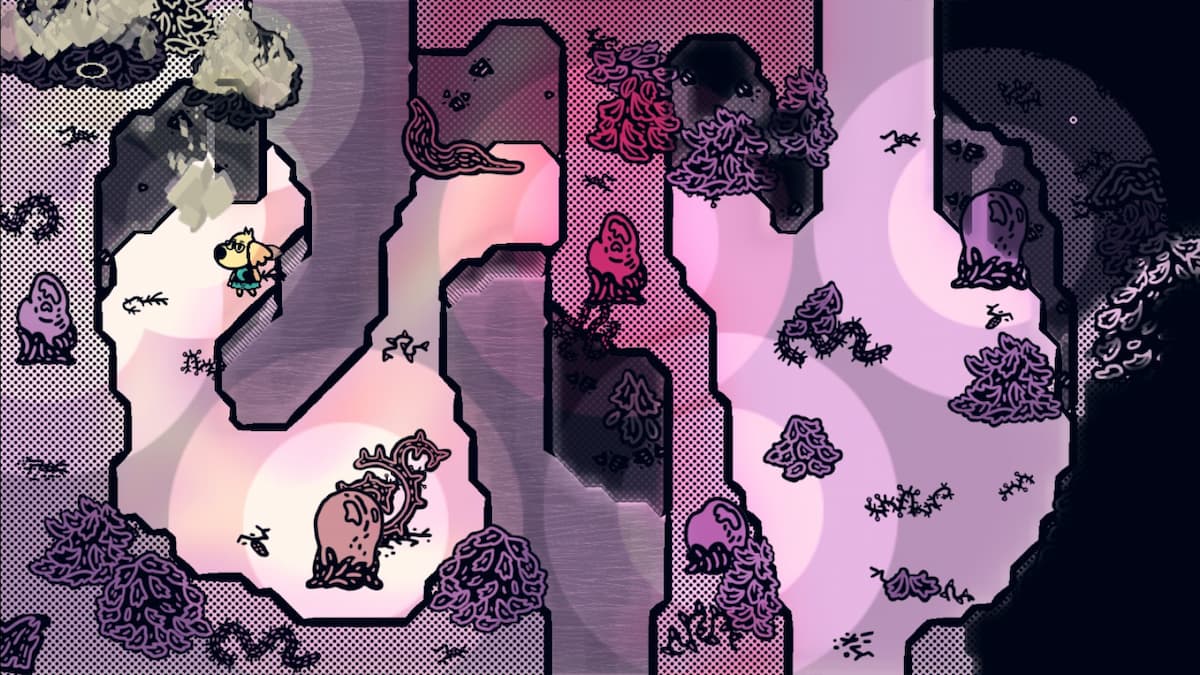 Self-doubt and depression are prominent themes in Chicory: The Color Story, and this Wielder’s process is a huge reflection of that of the character of the same name. As an apprentice, Chekanka could not complete her own last attempt, which has the theme of “handing over a master’s degree to a student.” You will walk down the river to a corrupt tree and face the dark side of being a ruler.

Go one screen up from where you met Chicory, and swim and climb up to the top right of this screen. You will notice that you can paint in the bouncing bush between the gap from you on the left platform – lift this bounce pad, jump to it and let it lower to the left. On the next screen, there will be three vineyards in front of you. Take the center and from there jump into the river and continue swimming. You can ignore everything else on this screen if you don’t want to buy some more goodies.

Black sludge will prevent you from the next two screens – the painting will temporarily leave them, but it will quickly move around them. On the first screen, go to the mainland, go through the sludge to the bottom and use the plant to drain. Continue along the path to get to the left screen. Eventually you will want to watch the waterfall and get rid of any sludge along the way.

After talking to the emotional Chicory, you will swim down the river and enter the damaged tree in front of you. As in most dark areas, you will need to use your glowing color to illuminate the way forward. However, branches and leaves will block your path. On the first screen, notice two flames on the side; you can communicate with them with a brush, carry a flame and burn obstacles in front of you.

Slide the three screens up to reach a screen with a flame on the upper right and a swimming tube blocked by damaged flora. At first glance, the river will prevent you from taking the flame, because it will extinguish it. However, there is a way to move the flame. You can carry the flames along the walls, so grab the flame and basically pull it clockwise on the ground and avoid water. Destroy the damaged plants and flood the tube. Go down the stairs and go out to meet the boss.

This boss will be a damaged image of Blackberry and has very similar attacks as previous bosses. Your main strategy will be to circle around her, constantly move and paint on her. She will use squares and thick lines against you to avoid her, with her main attack being a grid made of these thick lines; as they form, try placing the empty squares between the rows. After defeating this fake Blackberry, you will regroup with chicory in the next chapter.