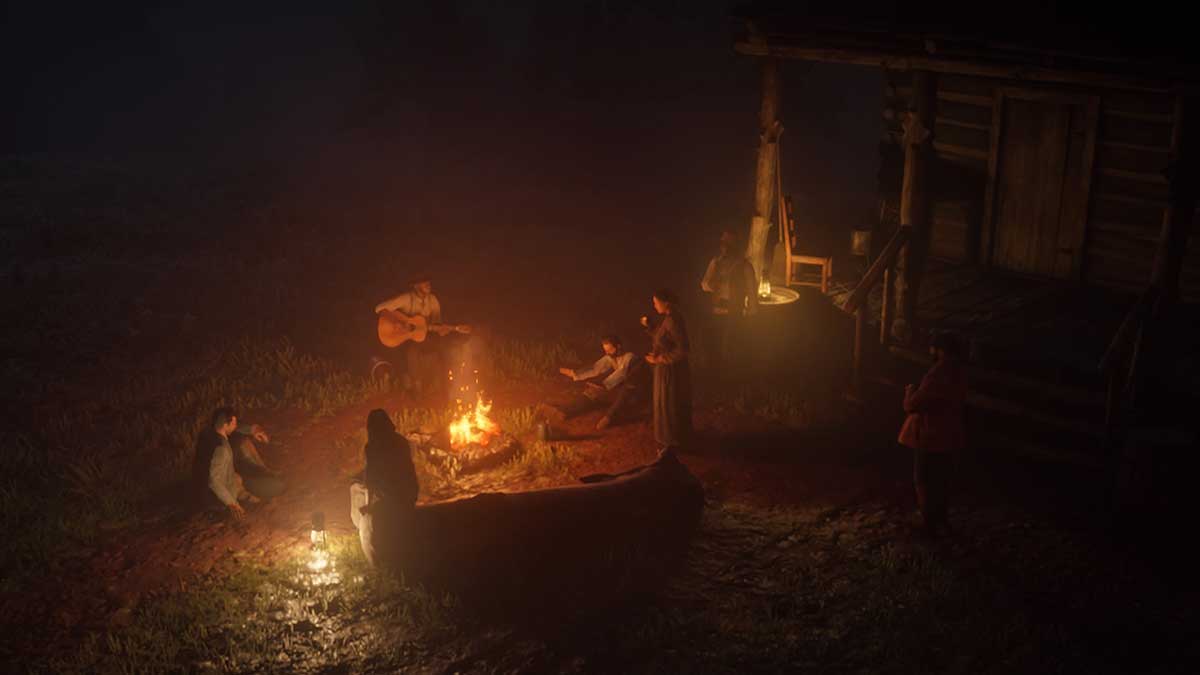 The Bluewater contract is a crime that has been added to Red Dead Online with the Blood Money Update. It’s a mission you can accomplish at all crime vendors, but it’s not the easiest. That’s why we’ve put together this guide for all three parts of this insidious mission.

This first part of the crime starts easily enough. You must intimidate John Bluewater. He’s a guitarist who knows where the small fortune is in cash, but he won’t tell you voluntarily. You have to intimidate him by aiming a gun at his face, shooting it close to you and hitting him in the face with several melee attacks. He then reveals that the map of the prey you are looking for is inside his guitar.

Take a look at the guitar and watch the waypoint. This is where the mission becomes more challenging. The area you are led to is filled to the brim with enemies and it takes a while to work with everyone. However, you will have to kill them all, because the money bag you need is inside a small shack in the middle of the area. Make sure you steal all the dead bodies for the Capitale.

When all the guards are dead and a bag of money in hand, it’s time to pass the prey to their contact. This part of the mission will then be completed.

The second part of this crime is divided into three camps. First, you will be redirected to the shelter of the old Bluewater John gang. Here you will find a small group of outlaws to shoot. There aren’t too many of them, and they always seem to shoot something that causes an explosion and kills several of their own men. Shoot from a distance and avoid the local wilderness as you approach the camp. It can kill you. The key you need is to lie on the table. This will take you to the next hiding place.

The second stash is much more challenging. Outlaws will continue to pour as you look for more guidance. Kill them all and plunder their bodies. The second clue is hidden inside the gloomy building. It’s a box on the floor with some papers. You will get a waypoint to the third and last hiding place.

The third hideout is the one you have to go through and get out of before you kill all the outlaws. They won’t stop coming to fill you with holes, and that can be exhausting for both your ammunition supply and your patience. A money bag is located in the building at the end of the shelter. It’s the one with the dog inside. You will see it as soon as you enter. Don’t forget to kill the dog before he kills you.

Once you have your money bag, you need to step back and get to the place of departure. Outlaws are chasing you all the way. Kill anyone who stands in your way and tries to take you down. This final stash is the only one you have to hurry to, because the timer will tick down at this point in the Agreement. Give me a bag of money and you will have the second part of this crime behind you.

The last part of this crime is definitely the best. If you are a fan of Robert Johnson, you will get incredible links here. You begin the mission by hunting for Bluewater John again. Turns out he’s holding back, and he’s got a lot of money somewhere in Bayou. Follow the waypoint to its place, enjoy the incredible cutscene and then roll it up.

If you come in like us, then the locals will pull you off your horse and start defending John. If that happens, beat them up and get to him as soon as possible. If you do not do so, he will find the horses and go so far that it will not be possible to complete this mission.

Once you’ve tied him up and tied him to your horse, you need to go to a few points on the map where John may have hid his money. We found that when we headed to the point marked on the map below, John immediately told us where the map was needed to find real shelter. So don’t waste time with other areas and go to this first.

Follow the route on the map and place John on the floor where you were told. If you haven’t had a bad vibe about this mission yet, you can do it here. John manages to escape from his shackles and leaves to play the guitar with the help of a gift he gained by selling his soul at this very place. Once he’s gone, you’ll unfortunately be attacked by what we can only describe as voodoo soldiers. Armed with spears, they are dressed as outlaws and will kill you if they get too close.

Go to the bag of money and grab it before the enemies attack you. In the end, outlaws will be added to the fight, so in increasingly dark weather there is something to fight. Once you have a bag of money, take a break to the final place to throw it away and end this nightmare.

If you are trying to go through this part, first try to kill all the enemies on the horse. They are the most mobile and will cause you more trouble than they cost. Enemies will not attack you until they are up close, except for a few archers. First remove the biggest threats, then try to put them on horses and leave the slower enemies in the dust. Thanks to the spooky atmosphere, it is not easy to see what you are shooting at, but if you try to focus and use everything you have at your disposal, you should get there within the set time.